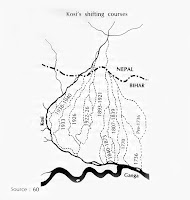 
Kosi : Back to the Future

Yet again, taming of the river, Kosi, in eastern India has been proved futile. On August 18, the mighty river picked up an old channel it had abandoned over 100 years ago. The river broke its embankment in Kusaha in Nepal affecting nearly three million people. Bijendra Prasad Yadav, Water Resources Minister of Bihar said the buck stops at the Kosi High-Level Committee (KHLC) under the Central Government. “The KHLC hugely reduced the estimate submitted by State’s engineers for carrying out the flood protection work at Kusaha,” he said. Hapless people have turned their backs on the modern technology and its vanguard, the government as both of them could hardly address their centuries old woes. They offered sacrifices of animals to pacify the river; some pregnant women who delivered the babies in make-shift relief camps christened their girl child as Koska Maharani (Princess Kosi) or Kosi. They resorted to ancient Indian wisdom of establishing relationship with the nature and natural calamity.
Barh Mukti Abhiyan (Freedom from Flood Campaign) had long back warned against the embankment trap. By building embankments on either side of a river and trying to confine it to its channel, its heavy silt and sand load is made to settle within embanked area itself, raising the riverbed and the flood water level. The embankments too are therefore raised progressively until a limit is reached when it is no longer possible to do so. However, vested interests of the contractors in this God forsaken country prevailed and millions of rupees have been spent on these embankments almost every year.
Kosi originates in the Himalayas and with its tributary Arun brings the greatest amount of sediment load. Once it crosses the mountains, gorges and foothills and enters into plain the sediment load is deposited in an immense alluvial fan that grown to an area of about 15000 square kilometers. Hence Kosi does not have a single well defined channel. It has numerous interlacing channels that shift laterally over the fan from time to time. The Kosi’s alluvial fan has fertile soil and abundant groundwater. The diagnosis and prognosis of this River of Sorrow can be traced into the myths and legends.
Francis Buchanan in “An Account of the District of Purnea in 1809-10” documented one story of the river Kosi. She was said to be the daughter of Kausik Raja. Besides this nymph he had a son Viswamitra, who was strenuous worshiper of Para-Brahma, or the Supreme Being and rejected the worship of the inferior gods. The nymph was married to a Brahmin who prayed to the gods that she be changed into a river.
Another legend says, Kosi was the daughter of God Siva. Although she is worshiped as a mother goddess, she has been described as impudent hussy who leaves her bed every night and reaches out for strange beds. She is the most beautiful teenager on the earth. A huge mighty demon called Rannu Sardar fell in love with her. Amused and surprised, she cleverly put forth a condition that if could contain her (the river) between the Himalayas and her confluence with Ganga in one night’s time, she would accept. The demon agreed and set about his task. With an enormous spade that weighed two tons, he began cutting the banks of the river to contain her flow. As the work progressed Kosi got nervous and rushed to God Siva in the Himalayas. Agreeing to help her, God Siva went, disguised as a rooster and started crowing in the mid-night. The demon thought that morning is approaching. Fearing his life, he threw his spade and ran away. And the Kosi has since continued her unruly flow unchecked. The boat people on the Kosi River believe that Ranu Sardar is trying to achieve his task in the hope of marrying Kosi, one day. That’s how they explain the continuous erosion of the sand banks.
In his path breaking Hindi novel—Parati Parikatha (Fable of Barren land) , Phanishwarnath Renu has documented another story of Kosi. According to this story, Kosi’s maternal home was Paschim Tirhaut (West Tirhaut) and her in-laws home was Purubi (East). She was harassed and tortured by the mother in-law and her two daughters. Kosi fled from the in-laws house for the maternal home. The mother in-law and sisters in-law, tried to stop her by black magic. They tried to arrest her by heavy torrential rains that culminated into the great devastating flood. Kosi, although completely exhausted as she was on the run continuously, struck back with her magical powers that lifted the patch of the earth and saved her from the raging flood. In the process, that huge patch of earth turned into a barren land mass in Purnea district. This folktale tries to explain as to why Kosi is moving from east to west while changing its course.
Renu’s novel ends on the promising note of taming of the river by the modern engineers. Obviously, the Freedom Fighter novelist was deeply impressed by the romanticism of Jawaharlal Nehru. But the River of Sorrow drowned the reputation of the modern engineers in the recent deluge. No wonder that people are turning to the legends and trying to establish relationship with the river. She can be the Goddess, ill mannered teenager or destitute wife. The people inhabiting the alluvial fan of Kosi, don’t want to conquer the nature. They are yearning for the peace with the nature. (The statesmen at Copenhagen are yet to realize this simple truth.)
Posted by सुनील तांबे at 15:31